The Kind of Stuff The Strikers Are Made Of

The New-York newsboy has for many years been an important and a conspicuous figure in metropolitan street scenes, but he came into extraordinary prominence last week on account of the strike, which was managed on the same lines as that of the streetcar employes [sic], but with better judgment and less venom. The grievances of the boys were few, but they were considered serious enough for war, and when that was declared every boy felt himself a solider, ready to follow the command of the hastily appointed leaders, and the dangers of life and limb and the pecuniary losses were not taken into consideration when there appeared a chance to gain their point. Certain evening papers are sold to them at 60 cents a hundred, and they wanted them for 10 cents less. In order to bring the publishers to teams the boys refused to sell the papers, and, like other strikers, made desperate efforts to prevent others from taking their places. The scale of prices for papers to the newsboys has been fixed so that they can make a fair profit on their sales. They pay two cents for three cent papers, one cent for two cent papers, and most of the once cent papers cost them one-half cent. 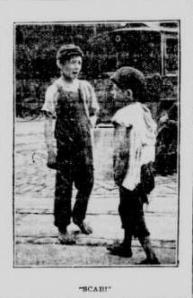 The newspaper habit is so well developed in the people of New-York that the newsboy has become a necessity, and there are few places in the city where he can not be found during all hours of the day and until late at night. It requires no city license nor permit from the Health Department to become a vender [sic] of papers, and hundreds of little children are sent out with a few cents every morning by needy people to buy and sell papers, and by that means help toward the support of the family. But having the necessary capital is not all that the newsboy requires. He must have a place to sell his papers, and if he intrudes upon the territory of some newsboy who has already worked the ground and established a trade he must be prepared to fight for the place or in some way compromise with the little merchant who is already established there. If the corner or the block is a paying one the original newsboy may take the new one into his employ at a stated sum, but if it is only large enough for one boy the prospector must look elsewhere.

No census has ever been taken of the newsboys in New-York, and all figures as to the number of the business are based on speculation, but it is estimated by the leaders of the union that there are no less than fifteen thousand in the city, and this number is exceeded during the vacation months. The boy who begins to sell papers at the tender age of six or seven stands a much better chance of success at the start, and runs less risk as far as opposition is concerned, than the boy who has already learned how to swear and smoke cigarettes. “De little kids don’t know nothin,” said a patriarch of eighteen, “an’ if dey acts right and don’t git gay, de boys give ’em a show an’ all dey has to do is to keep up wid deir own class. If dey do de baby act an’ mix beggin’ wid sellin’ papers, dey don’t have no show wid de gang, an’ dey has to move on.”

Taken as a class, the boys are keen and sharp, quick to see an advantage, and as full of fun as they are of fight. During business hours they give close attention to work, and it matters little what the weather conditions are, the boy with an established place or route is on hand with his papers. He needs no prompting as to when to buy an extra supply, for he knows news, and can gauge the public demand on that point. In the dull hours he watches the baseball bulletins, the returns from the racetracks and plays craps and other gambling games, for not matter how small he is, the up to date newsboy is deeply interested in all sporting events, with a decided leaning toward prize fighting.

Only a few years ago nine-tenths of the newsboys were of Irish parentage, but other elements have come into the business, and, according to the figures given by “Dave” Simons, the ex-president of the Newsboys’ Union, two-fifths are now Jews, one-fifth Irish, one-fifth Italian, and one-fifth “niggers, goils, cripples, old women, fakirs, beggars an’ sich.”

While his business methods are about alike in all parts of the city, the vender [sic] of newspapers is not the same in appearance everywhere. In the hotel district and in the residence part of town he is fairly well dressed, with a dash of “tough” always conspicuous, but his garb grows poorer and his general make up tougher as his field of labor brings him further downtown. To see him at his best one must be in Park Row between 2 and 4 o’clock in the afternoon. The boys crowd and crush and fight to get at the distributing places, and then, crying their wares in all keys from high falsetto to deep basso, they rush for their respective routes in many instances meeting customers into whose hands they thrust the papers which they know are desired, never stopping for pay, but knowing that the man will pay them in a lump on a certain day. 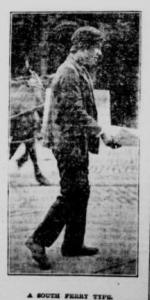 These are the newsboys of the ordinary, everyday class. But there are others who have outgrown the barking time, who stand at their self-selected posts and hand the papers out to their customers, while their helpers, sometimes four or five in number, hustle in the crowds near by and come to replenish their stocks when they are exhausted from the “boss’s” pile. These helpers get from 10 cents a day to $3 a week. 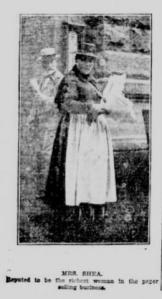 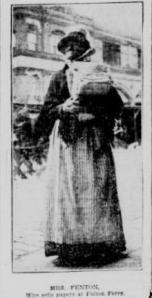 As soon as a boy has bought, fought or found his way into the procession, his associates size him up, study his traits and peculiarities, and if he has the elements of popularity he soon receives a nickname. Even the women, who play no small part in newsboys’ circles, have their nicknames, and Mrs. Shea, whose portly form takes up valuable space in Park Row, near the Bridge, is often addressed by a name which is powerful in financial circles, because she is said to be “awful rich”; Mrs. Cochran is addressed as “Aunty,” Mrs. Myers is “Beauty,” and old Hannah Kleff is meant when they boys call “Fight.” “But Hannah’s all right, and so is Annie Kelly,” said a striking newsboy. “Dey is union men for fair, but some of de udders has got money to burn, the are scabs just de same.”

There is one class of newsboys that makes its appearance only at rare intervals, and then only for a short time. This class is composed of the deep throated men who travel in pairs in the residence parts of the city, where they make night hideous with cries that sound like “Uxtra! uxtra! All about the uxtra!”

People buy the papers at an advance price, are always sorry for it, and the next time the hawkers appear on their street they buy again. The regular newsboy looks down upon these fakirs, as he does upon the boys who stand around the theatres and beg people who come out to “buy dis last paper–I want to go home and da’ssent till I’m sold out.” They have no use for the little fellows who sit on the curbstones and pretend to be asleep, with a fwe crumpled papers in their hands. “Dem kids,” said “Cheeky” Wilitz, “is a disgrace. Dey stand in wid fellers dat give ’em de papers, and den dey do de cry act, de lost penny act and de sick story, and makes money for de big blokes. You can see ’em sneakin’ into de open air places, beer gardens, and all over where dere’s people, and some of ’em works do poor dodge so slick dat five papers ‘ll last ’em all night.”

One of the best types of the New-York newsboy is “Dave” Simons, the ex-president of the union. He was born in Ludlow-st. twenty-one years ago, and according to his own statement, has sold papers since he was eight years old. “But I graduated from the Norfolk-st. school,” he said, “just as well as the other boys.” For twelve years he has had his station in City Hall Park, where he now employs several boys to help him. After business hours he puts on the gloves with young men who have aspirations for prize ring honors, and has appeared on several occasions at the various athletic clubs and demonstrated that he could use his fists. When asked what he would do if someone attempted to sell papers on his territory he said: “If de man kin lick me, he kin have de place, and dat’s de case all over. De newsboy has got to look out for himself, and if he’s no good he’d better quit soon.” 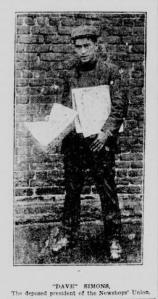 While Simons inspires others with confidence, his fellow members seem to believe that he is untrustworthy, and when the strike was at its height they deposed him and elected Morris Cohen in his place. He was chosen for no stated time, and his term of office will also probably be a short one.

Another class in the newsboy business is composed of the speculators who by the “left overs.” The boys who do not wish to keep their papers overnight to have them redeemed or exchanged the next day sell them at a discount to the speculators, who in turn hire night boys to sell them at full prices. These speculators also supply the small fry with papers to the amount of the credit which they have with them for returned papers, and they are looked upon by the fraternity as the “big bugs” of the business.

The profits which are realized by the boys who sell papers find their way to the savings banks and to the household purse to a great extent; and although the average newsboy gambles and cultivates the habits of a miniature “sport” he is thrifty, and many families in the crowded district escape misery and want because of the paper profits which are brought home by the children, and many bank accounts would never have been possible if the foundations had not been laid by the boys whose stock in trade at the start was pluck and a good pair of lungs.